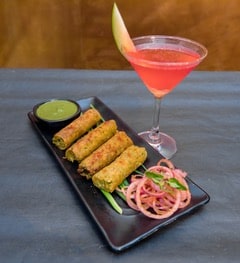 Hands down, Hue, Vietnam has the best spring rolls to be found

The city of Hue, considered by many to be the most beautiful of all cities within Vietnam also is known for the most delicious spring rolls in all of Vietnam and perhaps all of Asia. Be it the blend of vegetables, the method of layering the rice paper covering or the deep fried preparation, it is hands down the favorite of local residents and the many travelers who visit the city. Centrally located within the country, the city has a wealth of historical attractions that make a visit one of interest and pleasure. Since 1989 First Cabin Travel has created luxury-styled itineraries to unique and varied destinations, and began travel to Vietnam when the country first opened to U.S. travelers.

Lying on a plain backed by foothills of the  Annamese Cordellia and situated 5 miles (8 km) from the  South China Sea  coast, Hue is  traversed  by the broad, shallow Huong River (Hue  River, or Perfume River). At the city’s heart, on the river’s left bank, is the Chinese-style Vietnamese imperial citadel, Dai Noi, from which the  Nguyen  family controlled southern and central Vietnam from the mid-16th to the mid-20th century.

The citadel’s 7-mile (11-km) walled circumference enclosed priceless artifacts  of Vietnamese civilization. During colonial times the French quarter was on the right bank. The commercial section of the city is located to the east of the imperial capital. First cited about 200 BCE, when it was the seat of the Chinese military authority in the kingdom of Nam Viet (Chinese: Nan Yüeh), Hue passed about 200 CE to the Cham. It was captured repeatedly by the Chinese and in 1306 was ceded to Dai Viet (Vietnam).

From 1558 Hue was the seat of the Nguyen family. In 1802 Prince Nguyen Anh, assisted by the French, became the emperor Gia Long of the newly established Nguyen dynasty, which included Tonkin (northern Vietnam) and had its capital at Hue.  The last of his line, Bao Dai, officially emperor of Vietnam from 1926 to 1945, functioned as a figurehead under the French protectorate, which had existed from 1883. Under Japanese occupation from 1940 to 1945, during World War II, Hue became the seat of a provisional administrative committee of noncommunist Vietnamese in April 1947. On July 1, 1949, however, the newly declared state of Vietnam chose Saigon (now Ho Chi Minh City) as its capital, and Hue lost its historic function.

Since the end of the war, Hue has undergone several upheavals. Suffering early damage during the First Indo-China War (1946–54), it experienced severe civil disturbances in 1963 and again in 1965. During the 1968 Tet Offensive of the Vietnam War, many of the former royal buildings, museums, libraries, and Buddhist shrines, including the Temple of Heaven, were damaged. The city was subsequently rebuilt.

Situated in the path of the northeast winter monsoon (September to April), the city receives heavy rainfall, 104 to 116 inches (2,600 to 2,900 mm) annually. Summers are hot and relatively dry, June being the warmest month.

The early 17th-century Thien Hue is linked to Ho Chi Minh City by road and a rail line, both built during the French occupation. The city also has an airport at Phu Bai, some 10 miles (16 km) to the southeast. Hue’s university was originally founded in 1957; after being reorganized in 1976, it was granted university status in 1988. The early 17th-century Thien Mu pagoda and the tombs of the Nguyen rulers are near the city.