Hoi An – Luxury-Styled Travel In A Village-Like Surroundings 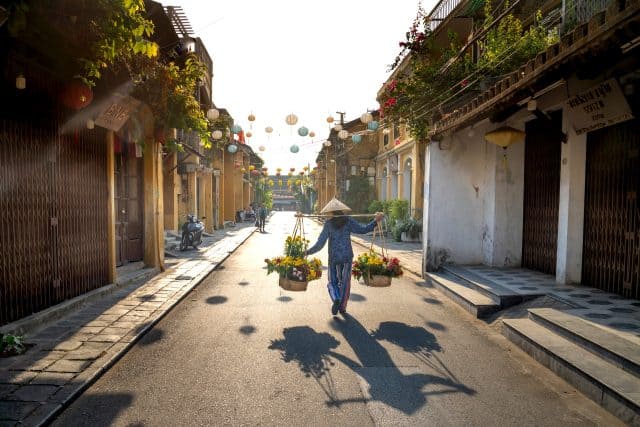 Hoi An, originally a seaport used by all in the Champa Kingdom and a trading port for foreign merchants. It is a quaint village-like town, where you will can explore afoot or by cyclo down the narrow pathways of the inner corridor, Highlights include the 400 year-old Japanese Bridge, a generations old Clan House, a Chinese temple and an abundance of shops that cater to both tourists and the local populace. Nestled aside the long shoreline of the South China Sea, southeast of Da Nang, it has become quite the popular tourist destination. Aside from the beauty and friendliness of the townspeople, a visit to Marble Mountains and the Cham Museum offer their own measure of interest.

Marble mountains is a cluster of five marble and limestone hills located south Da Nang. The five mountains are named after the five elements: Kim (metal), Thuy (water), Moc (wood), Hoa (fire) and Tho (earth). All of the mountains have cave entrances and numerous tunnels, and it is possible to climb to the summit of Mount Thuy. Several Buddhist sanctuaries can also be found within the mountains, making this a tourist destination. The Marble Mountains are home to several Buddhist and Hindu grottoes. A stairway of 156 steps leads to the summit of Thuy Son, the only Marble Mountain accessible to visitors. It allows a wide panoramic view of the surrounding area and the other marble mountains. There are a number of grottoes, including Huyen Khong and Tang Chon, and many Hindu and Buddhist sanctuaries, the temples of Tam Thai, Tu Tam and Linh Ung, and the pagoda of Pho Dong. The sanctuaries feature statues and relief depictions of religious scenes carved out of the marble.

The area is known for stone sculpture making and stone-cutting crafts with many local shops nearby offering rather magnificent stone carvings both large and small.

The Museum of Cham Sculpture is a museum located just south of Da Nang city.

The establishment of a Cham sculpture museum in Da Nang was first proposed in 1902 by the Department of Archaeology. Henri Parmentier, a prominent archaeologist of the department, made great contributions to the campaign for its construction. Reportedly founded in 1915 as the Musée Henri Parmentier, its first building opened in 1919 and was designed by two French architects, M. Deleval and M. Auclair, who were inspired by Parmentier to use some traditional Cham elements in the composition. Prior to the establishment of the museum, the site was known as the “garden of sculptures” and many Cham sculptures that had been collected at various sites had been brought there over the preceding twenty years.

The museum has been expanded twice. The first expansion was in the mid-1930s, with two new galleries providing display space for the objects added in the 1920s and 1930s. Henri Parmentier directed the display based on the areas where sculptures were found. In 2002, the Museum was again expanded with the two-story building providing an additional 1000 square meters. The new building provides not only space for display, but also for storage, a library, a restoration workshop and offices for staff.

The museum houses the world’s largest collection of Cham culture and has become a popular tourist destination.